What Impact Does Paying Real Living Wage Have in the Cost-of-Living Crisis 2022?

This Living Wage Week 2022, we look at how the latest increase in real Living Wage rates is impacting the cost-of-living crisis for many of Britain’s lowest paid and most vulnerable workers.

You are here: Home / Insights / What Impact Does Paying Real Living Wage Have in the Cost-of-Living Crisis 2022?

Every year in November, we celebrate Living Wage Week. And this year it’s more important than ever before. With the rapid rise in the cost of living having a serious negative impact on everyone’s wellbeing and mental health, the impact is still felt most by households with low incomes.

In their July ‘22 report on the topic, the House of Commons Work and Pensions Committee said ‘the greatest impact of increased costs was being felt by the poorest in society’. These groups face higher inflation proportionately (believed to be because they spend a greater proportion of their income on energy).

The think tank ‘New Economics Foundation’ reported that the rise in costs for the poorest half of households is nine times larger than for the top 5% of highest-earning households.

3.7 million hard-working people are struggling to afford the basics

The Joseph Rowntree Foundation found 60% (of the lowest earning 40% of households) had gone without at least one essential since the start of 2022. This included heating, meals or buying basic toiletries.

According to the Living Wage Foundation and Survation’s recent research, 78% of workers who are not paid the real Living Wage (including cleaners) say the financial impact of the cost of living crisis is the worst they have ever faced. This represents 3.7 million dedicated and hard-working people who cannot afford to live.

Of these, 2.7 million workers have been forced to turn to food banks in the last year for their meals. 42% of low paid workers are already skipping meals entirely and one third live through winter without heating.

Poverty breeds anxiety and increases the risk of depression. It is also argued to have a long-term impact on an individual’s wellbeing. Not only does it create stress and worry but it negatively impacts a person’s self-esteem too, compounded by the reactions of others to those in poverty – it’s a slippery slope for low paid workers.

In June this year, the Lancet produced findings that indicated there was a probable and more importantly, a causal relationship between changes in income and both mental health and (more likely) wellbeing.

In a sign of how insufficient their pay is in meeting rapidly increasing living costs, over a quarter of low-paid workers have no money left at the end of the week after paying for essentials. Nearly half have less than £10 left over, and two-thirds have less than £20. 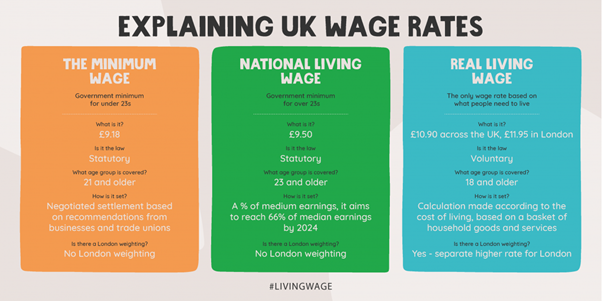 New real Living Wage rates were announced on 22nd September 2022 and saw hourly rates in London rise to £11.95 and £10.90 outside of the City. It represented the real increase in the cost of living, and the largest year-on-year rise of 10.1%.

While 390,000 workers will benefit from the much-needed like-for-like increase in hourly pay – many more still remain in dire financial positions on the unrealistic Government set minimum National Living Wages.

Those lucky enough to be earning the new real Living Wage rates will earn between £3k and £5k more per annum than their minimum wage-earning counterparts. This comes at a vital time for many households already struggling and below the poverty line.

The new rates will provide employees and their families with greater security and stability which will be necessary amid unparalleled rises to the cost of living.

How the real Living Wage rates are calculated

Take action now if you can

Key workers such as cleaners, have been relied on during the pandemic to help keep public and private spaces clean and reduce the spread of Covid-19. Yet some, still do not receive fair pay and remuneration for their hard work. These low-paid roles tend to be harder to fill, have higher turnover and employees are less motivated than their real Living Wage counterparts.

Where businesses are able, we encourage them to consider the business case for investing in Living Wage for all your contracted and employed staff – cleaning or otherwise. 80% of businesses who switched said they saw in improvement in the quality of work turned out and 93% overall saw continued business benefit.

If it’s something you are considering, please get in touch and we’d be happy to help you build a compelling business case. We’ve years of experience seeing first-hand the tangible value fair pay rates can create and would be happy to share this expertise with you.

Hear first hand from The Clean Space’s employees April and Rogeria, what paying the real Living Wage means to them and their teams >

Get a cleaning quote

Celebrating the Contribution of Cleaning Staff on i-Recognise Day

Speak to us today to get more value from your
cleaning services.

You can find out more about which cookies we are using or switch them off in settings.

This website uses cookies so that we can provide you with the best user experience possible. Cookie information is stored in your browser and performs functions such as recognising you when you return to our website and helping our team to understand which sections of the website you find most interesting and useful.

By visiting and browsing this site, you allow us to place cookies on your device. This allows us to help make this website work better for you.

Strictly Necessary Cookie should be enabled at all times so that we can save your preferences for cookie settings.

If you disable this cookie, we will not be able to save your preferences. This means that every time you visit this website you will need to enable or disable cookies again.